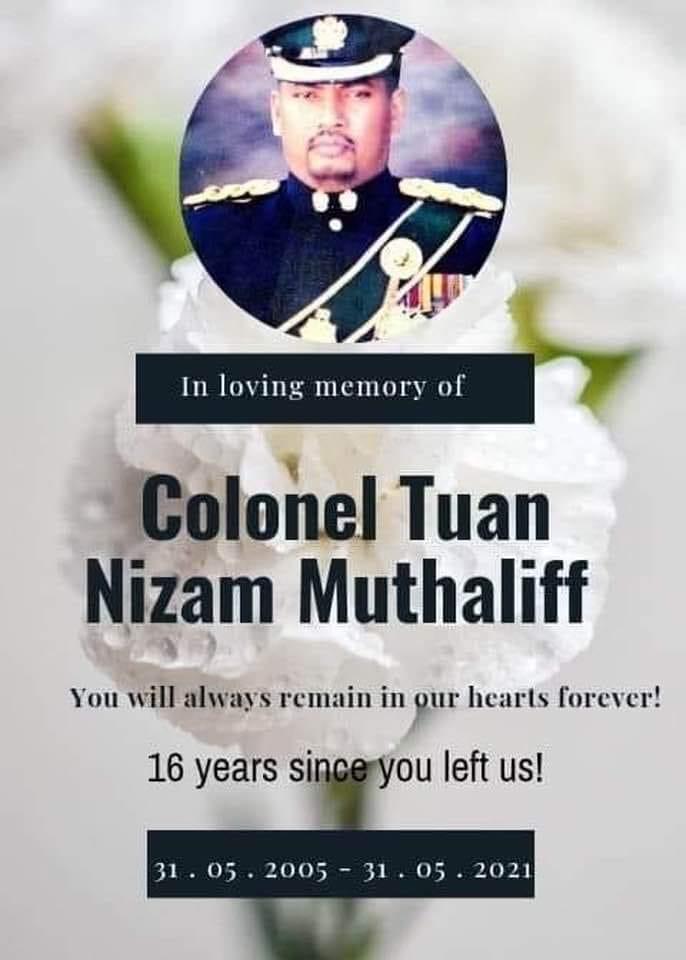 A Real Son of the Nation - In Remembrance of Col. Tuan Nizam Muthaliff

“Never in the field of human conflict was so much owed by so many to so few.” - Winston Churchill

It is disheartening, demoralizing and depressing to read blog posts, Facebook pages and online forums hosted by the so called Sri Lankan patriots and flag-wavers who declare that “Sinhala Buddhists saved Sri Lanka from LTTE. So this country belongs to Sinhala Buddhists  only”.

It’s true that the majority of soldiers in the Sri Lankan Army were Sinhalese & majority of the casualties in the war were Sinhalese soldiers but this is normal and expected as it’s proportional to the total population of Sri Lanka, of which the majority are Sinhalese. However, it’s an ungrateful and churlish act to disregard the heroic and patriotic service of other races in defending Sri Lanka from its enemies.

Today 31st May, 2021 is the 16th death anniversary of Colonel Tuan Nizam Muthalif. He was the Commanding Officer of the 1st Battalion of the Sri Lanka Military Intelligence Corps.

Tuan Nizam Muthaliff was born in 1966, and he was an old boy of D. S. Senanayake College, Colombo. He was 20 years old and working at Hotel Triton, Ahungalla as a Receptionist, when he was selected to join the Army. As per his brother Tinty Nasser, Col. Muthaliff’s duty in the Eastern Province was the days of the demon to the LTTE cadres. Every night that was passed, was considered a gift by the LTTE units, because Muthaliff was out there in the darkness! He was with his team, looking for terrorists, and bringing them down one by one; about 10 to 15 each night. He would say to his colleagues in the camp not to try to look for him if he was found missing in the nights. “I’ll be back!”, he would say, when he disappears in to the darkness; and in the early morning twilight he returns to tell his colleagues in the camp where and where to collect the LTTE corpses. A cold wave of panic swept across the LTTE. Terrorist leaders froze just by hearing the name of Major Muthaliff.

When the renegade DIG Kulasiri Udugampola exposed the safe house of LRRP located at the Millennium City housing scheme, Athurugiriya, the LTTE started a massive manhunt killing almost all members of the Long Range Reconnaissance Patrol including its informers. Many of Muthaliff’s friends and well-wishers offered to take him and his family to another country, considering the safety of his life. But the Major refused them all. “If we leave the country now, our children too would have to go to war!”, was his answer. Due to the inevitable threat to his life, he was transferred from Vavuniya to Colombo in 2004.

On the fateful morning of 31st May 2005 he was on his way to duty, when the fatal attack on him was carried out by the LTTE at Polhengoda Junction. Major Tuan Nizam Muthaliff laid his life down for the motherland.